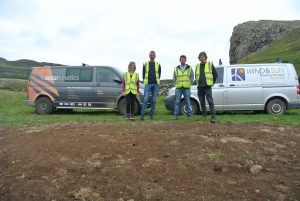 The days of overnight power blackouts on Fair Isle, 25 miles south of Shetland, and on the islands of Canna and Sanday, off the west coast of Scotland, are being consigned to history thanks to new power systems supplied and installed this summer by a team of Herefordshire firms led by Wind & Sun, with help from SolarKinetics and Pro-Fit Energy.

Residents have ditched their diesel power generators in favour of new community-owned renewable electricity systems based on solar PV, wind, and battery storage technologies in a bid to cut fuel usage and costs.

Based in the old Sheppards Stores in Upper Hill near Leominster Wind & Sun has been supplying quality, reliable, energy efficient wind & solar electrical products since 1984. They installed the first domestic grid connected PV system in 1994 –now seen everywhere on the roofs of houses, factories and barns, and have previously  provided prize winning renewable power systems for the Scottish Islands of Foula, Eigg, Rum and Muck.

They now work primarily as distributors, providing solar equipment and training to installation companies all over the world and for these projects enlisted the help of two of their best local clients, Solarkinetics from Fownhope and Pro-Fit Energy in Hereford. 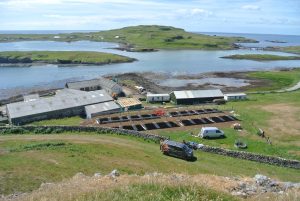 Located roughly halfway between Shetland and Orkney, Fair Isle is the UK’s most remote inhabited island and can be frequently cut off from the mainland for long periods due to weather and sea conditions. The 5km long island, famous for its’ knitwear and place in the shipping forecasts, is owned by the National Trust for Scotland and is home to a world renowned bird observatory (Fair Isle has been a focus of continuous scientific research into seabirds and bird migration since 1948).

Previously, power was supplied by a combination of wind and diesel, but homes were left without electricity between 11.30 pm and 7.30 am. Now all 55 inhabitants will discover the simple 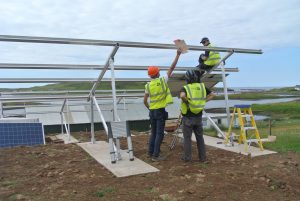 pleasures of instant power at any time.

Isles of Canna and Sanday

Canna is the westernmost of the Small Isles archipelago, in the Scottish Inner Hebrides approximately 25 miles from the mainland. It is linked to the neighbouring island of Sanday by a road bridge and sandbanks at low tide. The island is 4.3 miles (6.9 km) long and 1 mile (1.6 km) wide.

Also owned and managed by the National Trust for Scotland it was previously powered by diesel generators, but these were expensive to run and difficult to maintain.

Wind & Sun had been involved in helping develop the systems over the last five years after residents from Canna and Fair Isle visited our previous pioneering work on Isles of Eigg and Muck.

After shipping equipment from the mainland, Wind & Sun carried out the installation during several trips over the summer fitting the battery storage, inverter system and PV arrays. (helped by our good friends Gordon & Jaine from Solarkinetics and Nick from Profit Energy). Finally the wind turbines were delivered, erected and connected up by Harbon Wind on Fair Isle and SD Wind Energy on Canna/Sanday.

Wind & Sun then commissioned the system and in October they were both switched on! 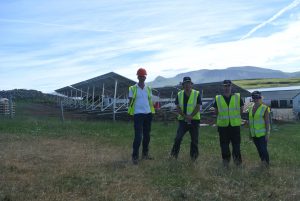 The solar PV’s and wind turbines generate power for the island and charge the batteries. As batteries become full the frequency of the grid rises and this is used to automatically switch on heating loads located in community buildings to take advantage of windy weather using a number of frequency controlled switches.

In the event of insufficient renewable energy the back-up generator powers the island properties and re-charges the batteries. It is expected that this will now be needed less than 10% of the time.

The systems will be operated by local residents, both communities have established enterprises to own and operate the new equipment. Electricity will be provided to residents after which profits from the power generated will be used to cover operation and maintenance costs, and reduce bills for local homes and businesses

Wind & Sun have trained a local team to look after the scheme and will be providingon-going support to the islanders, monitoring performance and adjusting critical operating parameters remotely if required.

Steve Wade, Wind & Sun’s Managing Director said: “We’re pleased and proud to have built on our previous experience and completed our most challenging projects yet, both technically and in terms of logistics helping these island communities with some of the most sustainable electricity systems in the country.”

“In addition it was great to work with two of our most experienced customers to ensure that these island systems were installed to the highest standards, ensuring they will provide clean, reliable power for many years to come.”

Robert Mitchell, director of the Fair Isle Electricity Company, said: “It’s a big day for the island, we’ve got our electricity project up and running and we’re now going to be in the 21st century.”

“The island is exposed to the full force of Atlantic gales and we can finally start to put that to good use. As well as reducing the noise and pollution from the generators the new scheme will give us the capacity to build additional houses here, so that we can increase the number of people who can make their home on this beautiful island. We’re very grateful to all of our funders for their support in this vital project.”

More information about the systems can be seen here.